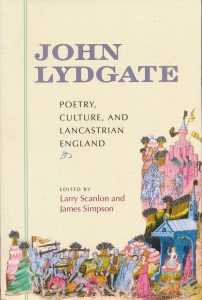 My contribution to this edited volume (Larry Scanlon), is an essay titled Propaganda, Intentionality, and the Lancastrian Lydgate.

Essays in this volume argue that it is time for a powerful reassessment of John Lydgate’s poetic projects. The pre-eminent poet of his own century, Lydgate (c. 1370-1449) addressed the historical challenges of war with France, of looming civil war, and of new theological forces in the vernacular. He wrote for household, parish, city, monastery, Church, and state. Although an official poet of sorts—perhaps the first major official poet in the English poetic tradition—he was not by any means a merely celebratory or sycophantic writer. Instead, he drew on his authority as monk to shape a contestative poetic space, underlining the grief and treacherousness of power. Despite his exceptional cultural significance, Lydgate has, for different reasons, been marginalized by many literary historical movements since the sixteenth century. John Lydgate is energized by the challenge of an oeuvre so large and so ripe for reevaluation. Each essay here makes a decisive contribution to an area of Lydgate’s corpus, and opens fresh perspectives for further investigation. Contributors write about Lydgate from a variety of critical perspectives and underscore the poet’s diverse writings, which included beast fables, mummings, hagiographical and devotional poetry, and civic pageants. The essays also reassess better-known works and themes in the field of Lydgate studies, including Lydgate’s unofficial laureateship, his relations to his patrons, and his relationship to Chaucer. This book makes an important contribution to medieval scholarship and it will be welcomed by scholars and students alike. (Read More)