Invasions and extinctions through the looking glass of evolutionary ecology 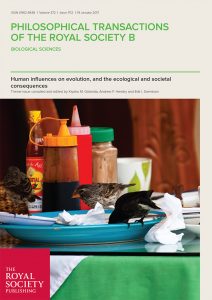 Global biodiversity is increasingly under threat from human activity, which has elevated rates of extinction and invasion by several orders of magnitude above historical averages [1,2]. The net result of increasing extinctions and invasions is a homogenization of global biodiversity that may be mitigated by two distinct but complementary goals: (i) suppress long-term viability of invasive populations and (ii) increase population growth rates of endangered native species. Although eradication and enhancement are opposite conservation goals, invasions and extinctions represent two extreme outcomes along a single gradient of ecological success and therefore may be determined by the same core set of ecological and genetic factors. In other words, invasions and extinctions of closely related species may be like reflections in Lewis Carroll’s looking glass [3], with similar elements reflecting opposite realities.

Several key environmental and demographic elements that affect population growth and long-term persistence do not differ fundamentally between endangered and invasive species. Both experience strong demographic bottlenecks, hybridization with divergent lineages, and the demands of surviving and reproducing in novel and changing environments. Yet, these common elements can lead to drastically different ‘realities’ or ecological outcomes, with invasive species expanding rapidly and endangered species spiralling towards extinction.

One hypothesis for these contrasting fates is that endangered and invasive species possess distinct sets of developmental and life-history characteristics that are either beneficial or detrimental in human-altered environments. For example, some species may be good invaders, because they have co-evolved with increasing human disturbances [4] or fluctuating environments [5] in their native ranges. However, a meta-analysis of 1813 species did not find evidence that invasive and threatened species possess contrasting traits [6]. It is likely that different characteristics are favoured at particular stages of invasion (i.e. transport, introduction, establishment and spread) [7–9]. But many invasive species are close relatives of taxa that are not invasive [10,11], suggesting that any functional basis for being invasive versus of conservation concern is not often phylogenetically conserved. If development, life history or other phylogenetically conserved traits do not differ consistently between endangered and invasive species, then perhaps more transient ecological and genetic factors are responsible for the varied ecological success of species in nature.

How is it that even related species, having similar growth and life-history traits and encountering similar environmental and demographic challenges, can end up at opposite ends on the spectrum of ecological success? Here, we apply an eco-evolutionary perspective to explore some of the similarities and outline important but often overlooked differences between invasions and extinctions. We focus on three areas of eco-evolutionary theory that reveal important differences between endangered and invasive species likely to affect ecological success: the composition of ecologically relevant genetic variation in natural populations, the genetic basis and evolution of phenotypic plasticity, and evolutionary constraints on the ecological niche. Our overall goal is to examine invasions and extinctions through the same lens of eco-evolutionary theory to suggest common principles for a unified approach to both basic and applied research in these areas. (Read More)