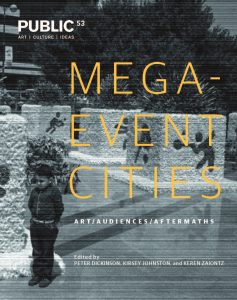 In this article, I recount how I attempted to realize Cameron’s aim to see and be seen. Between November 2011 and March 2012, I participated in three auditions for the Olympic and Paralympic opening and closing ceremonies in east London. Each time I journeyed on the 75 train and tube to Three Mills studio in the Olympic host borough of Newham, I entered as a covert ethnographer of the audition process. By situating myself among Olympic hopefuls I hoped to understand the pull of participation in a mega-event. I wanted to feel the combined charge of nation and participation in order to analyze it. What I quickly discovered was that I had to confront my own physical rigidity within the space of analysis. The last time I had engaged in the protocols of dance technique was at a summer wedding; previous to that, it was via dance lessons, as a child, at my public arts school—a platform where I failed daily and routinely to reproduce the steps of my dance teachers. However, there was this small part of me that thought, how hard can these auditions be? The organizers needed somewhere in the range of ten thousand volunteers for the four ceremonies. Surely, the numbers were on my side. If I could assume the appropriate amount of enthusiasm to fulfil the appearance of Olympic hopeful, then, why not me? (Read More)