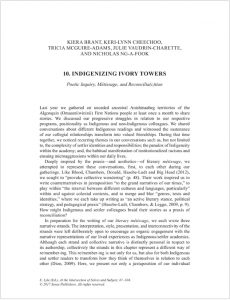 In 2016, we gathered on unceded ancestral Anishinaabeg territories of the Algonquin (Omaamiiwininii) First Nations people at least once a month to share stories. We discussed our progressive struggles in relation to our respective programs and our positionality as Indigenous and non-Indigenous colleagues. We shared conversations about different Indigenous readings and witnessed the sustenance of our collegial relationships transform into valued friendships. During that time together, we noticed recurring themes in our conversations: the complexity of settler identities and responsibilities, the paradox of Indigeneity within the academy, and the habitual manifestation of institutionalized racisms and ensuing microaggressions within our daily lives.

Deeply inspired by the praxis—and aesthetics—of literary métissage, we attempted to represent these conversations, first, to each other during our gatherings. Like Blood, Chambers, Donald, Hasebe-Ludt and Big Head (2012), we sought to “provoke collective wondering” (p. 48). Their work inspired us to write counternarratives in juxtaposition “to the grand narratives of our times,” to play within “the interval between different cultures and languages,” particularly within and against colonial contexts, and to merge and blur “genres, texts and identities,” where we each take up writing as “an active literary stance, political strategy, and pedagogical praxis” (Hasebe-Ludt, Chambers, & Leggo, 2009, p. 9). How might Indigenous and settler colleagues braid their stories as a praxis of reconciliation?

In preparation for the writing of our literary métissage, we each wrote three narrative strands. The interpretation, style, presentation, and interconnectivity of the strands were left deliberately open to encourage an organic engagement with the narrative representations of our lived experiences as Indigenous/settler academics. Although each strand and collective narrative is distinctly personal in respect to its authorship, collectively the strands in this chapter represent a different way of re/member-ing. This re/member-ing is not only for us, but also for both Indigenous and settler readers to transform how they think of themselves in relation to each other (Dion, 2009). Here, we present not only a juxtaposition of our individual Indigenous/settler identities as academics, but we also propose our ‘living testimonies’ and poetic inquiries as a means of provoking a complicated conversation toward reconceptualizing our subjectivities (Pinar, 1995) and our respective responsibilities as Indigenous and settler peoples. (Read More)