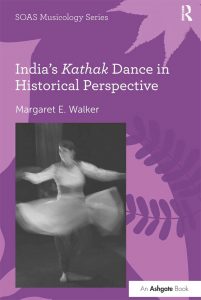 This monograph examines and deconstructs the accepted history of the North Indian classical dance form, kathak and proposes an alternate reading. Through an analysis both broad and deep of primary and secondary sources, ethnography, iconography and current performance practice, this enquiry undertakes a critical approach to the history of kathak dance and presents new data about hereditary performing artists, gendered contexts and practices, and postcolonial cultural reclamation. The account that emerges places kathak and the Kathaks firmly into the living context of North Indian performing arts.

Dancing Through Time: Margaret Walker (A conversation about the book)

Professor Margaret Walker pushes back her chair with a squeak, steps around her desk and begins to tap out a rhythm with her feet: “Right-left-right-left,” she says, and then “left-right-left-right.” It’s called a tatkar, she explains, the basic step in the classical dance of northern India known as kathak. The tatkar, properly danced barefoot, can be performed rapidly or slowed down until it becomes a sort of gliding walk.

A gliding walk that owes something to the dances once performed by courtesans is one of the elements that Walker says in her recent monograph, India’s Kathak Dance in Historical Perspective, went into the creation of the form, but which has been largely, and very deliberately, erased from history.

The director of the Queen’s School of Music, Walker is an ethnomusicologist by training, a field she became interested in by chance. Trained as a pianist and an Associate of the Royal Conservatory of Toronto, she decided to take a degree in music at the University of Toronto in her late twenties. Most of the course offerings were subjects she already knew about. “The only new thing was non-Western music.” She learned to play the gamelan and worked with James Kippen, a tabla (Indian drum) scholar at the university. With a background in percussion and dance, drumming interested her but because it was very much a male domain in India, “researching drum traditions would be difficult.” Studying kathak dance, however, which uses many tabla-inspired rhythms “fit right in.” Walker has studied kathak extensively, including spending a period of several months in Delhi working with a teacher there. Perhaps surprisingly, Walker says a Westerner studying in Indian music there is not regarded as anything special. “People have been coming to India from North America and Europe since George Harrison went to study with Ravi Shankar.” She felt at sea in India at first, but ultimately embraced it.

Which brought her to write about kathak dance. “If you Google kathak dance, you’ll read that it was an ancient story-telling tradition,” she says. Dating back millennia, the accounts say Brahmins danced it in temples to tell “the puranas, the ancient tales, to the illiterate population.”

“What my work has shown is that this has no foundation in fact whatsoever.” Kathak on her account is very much a 20th century creation, developed out of a number of different dance traditions, “some of which can be traced back as far as the 1200s but not to 3000 BCE.” There were the dances of the courtesans, which the British called “nautch.” There was the community of actors and musicians known as Kathaks (the word kathak comes from the Hindi or Sanskrit word that means a story). Some were dancers, but many were not. Finally there was what she calls “an embodied drum” repertoire whose steps are based on tabla drumming.

Kathak arose out of Indian nationalism in the period leading up to independence, born of “Indian people reacting against colonialism,” and the idea that India had no note-worthy culture or history. Kathak, on this account, linked modern India to its ancient classical culture, one “as ancient or more ancient than European culture.” This wasn’t unusual, says Walker. Something similar happened in Irish culture in the 19th century – “it’s a very common thing … a reclamation or invention of an identity as a reaction against whoever has been occupying you.” What Walker has done in her monograph is to reconnect it to the people in the immediate past from the men and women “who were the dancers and singers and so on in late 19th and early 20th century,” but who have been written out of the story – in the case of the courtesans (not prostitutes but women who did resist conventional female roles) because they represented a reality people would rather forget.

India’s Kathak Dance in Historical Perspective only appeared in September, so it is hard to say what the reaction to it will be. Walker admits to being “in some ways a little nervous.”

“The narrative of the ancient temple dance is very embedded,” she says, and her book “does call some accepted legacies into question.”