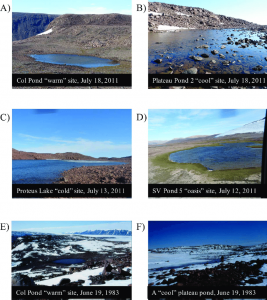 Recent climate change has been especially pronounced in the High Arctic, however, the responses of aquatic biota, such as diatoms, can be modified by site-specific environmental characteristics. To assess if climate-mediated ice cover changes affect the diatom response to climate, we used paleolimnological techniques to examine shifts in diatom assemblages from ten High Arctic lakes and ponds from Ellesmere Island and nearby Pim Island (Nunavut, Canada). The sites were divided a priori into four groups (“warm”, “cool”, “cold”, and “oasis”) based on local elevation and microclimatic differences that result in differing lengths of the ice-free season, as well as about three decades of personal observations.

We characterized the species changes as a shift from Condition 1 (i.e. a generally low diversity, predominantly epipelic, and epilithic diatom assemblage) to Condition 2 (i.e. a typically more diverse and ecologically complex assemblage with an increasing proportion of epiphytic species). This shift from Condition 1 to Condition 2 was a consistent pattern recorded across the sites that experienced a change in ice cover with warming. The “warm” sites are amongst the first to lose their ice covers in summer and recorded the earliest and highest magnitude changes. The “cool” sites also exhibited a shift from Condition 1 to Condition 2, but, as predicted, the timing of the response lagged the “warm” sites. Meanwhile some of the “cold” sites, which until recently still retained an ice raft in summer, only exhibited this shift in the upper-most sediments. The warmer “oasis” ponds likely supported aquatic vegetation throughout their records. Consequently, the diatoms of the “oasis” sites were characterized as high-diversity, Condition 2 assemblages throughout the record.

Our results support the hypothesis that the length of the ice-free season is the principal driver of diatom assemblage responses to climate in the High Arctic, largely driven by the establishment of new aquatic habitats, resulting in increased diversity and the emergence of novel growth forms and epiphytic species.  (Read More)