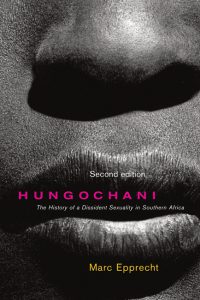 In the tapestry of global queer cultures Africa has long been neglected or stereotyped. In Hungochani, I seek to change these limited views by tracing Southern Africa’s history and traditions of homosexuality, modern gay and lesbian identities, and the vibrant gay rights movement that has emerged since the 1980s.

I explore the diverse ways African cultures traditionally explained same-sex sexuality and follows the emergence of new forms of gender identity and sexuality that evolved with the introduction of capitalism, colonial rule, and Christian education. Using oral testimony, memoirs, literature, criminal court records, and early government enquiries from the eighteenth century to the present, he traces the complex origins of homophobia. By bringing forth a wealth of evidence about once-hidden sexual behaviour, I strive to contribute to the honest, open discussion that is urgently needed in the battle against HIV/AIDS.

Homosexuality – or hungochani as it is known in Zimbabwe – has been denounced by many politicians and church leaders as an example of how Western decadence has corrupted African traditions. However, a bold, new gay rights movement has emerged in several of the countries of the region since the 1980s, offering an exciting new dimension in the broad struggle for human rights and democracy unfolding on the continent. In a new preface to this edition, I consider the recent advances of equality on the continent such as the legalization of same-sex marriage in South Africa, as well as discriminatory setbacks such as Uganda’s anti-homosexuality legislation. (Read More)