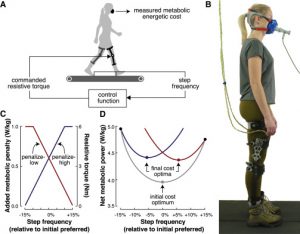 People prefer to move in ways that minimize their energetic cost. For example, people tend to walk at a speed that minimizes energy use per unit distance and, for that speed, they select a step frequency that makes walking less costly. Although aspects of this preference appear to be established over both evolutionary and developmental timescales, it remains unclear whether people can also optimize energetic cost in real time. Here we show that during walking, people readily adapt established motor programs to minimize energy use.

To accomplish this, we used robotic exoskeletons to shift people’s energetically optimal step frequency to frequencies higher and lower than normally preferred. In response, we found that subjects adapted their step frequency to converge on the new energetic optima within minutes and in response to relatively small savings in cost (<5%). When transiently perturbed from their new optimal gait, subjects relied on an updated prediction to rapidly re-converge within seconds. Our collective findings indicate that energetic cost is not just an outcome of movement, but also plays a central role in continuously shaping it.

School of Kinesiology and Health Studies