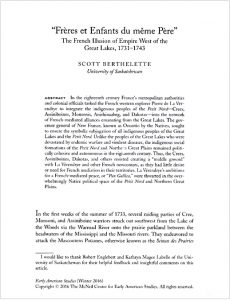 In the eighteenth-century, France’s metropolitan authorities and colonial officials tasked the French western explorer Pierre de La Vérendrye to integrate the Indigenous peoples of the Petit Nord – Cree, Assiniboine, Monsoni, Anishinaabeg, and Dakota – into the network of French-mediated alliances emanating from the Great Lakes. The governor-general of New France, known as Onontio by the Natives, sought to ensure the symbolic subjugation of all Indigenous peoples of the Great Lakes and the Petit Nord. Unlike the Great Lakes, devastated by endemic warfare and virulent diseases, the Indigenous social formations of the Petit Nord and Northern Great Plains remained politically cohesive and autonomous in the eighteenth-century. Thus, the Cree, Assiniboine, Dakota, and others, resisted creating a “middle ground” with La Vérendrye and other French newcomers, as they had little desire or need of French mediation in their territories. La Vérendrye’s ambitions for a French-mediated peace, or “Pax Gallica,” were thwarted in the overwhelmingly Native political space of the Petit Nord and Northern Great Plains. (Read More)