Formation and Evolution of the Centennial Deposit 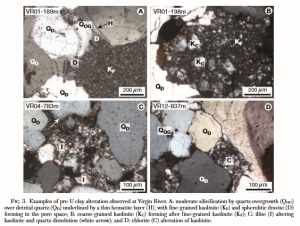 The Centennial U deposit is situated in the south-central Athabasca Basin (Canada) and straddles the unconformity between early Paleoproterozoic to Archean metasedimentary and metavolcanic rocks and granitoids, and the clastic sediments of the Paleoproterozoic Athabasca Group. Although it has most characteristics of an unconformity-related uranium deposit, the Centennial deposit is atypical in that it is not directly associated with an electromagnetic conductor (there is a paucity of graphite in the basement) or with a major reverse fault zone; it is distal from a major fluid conduit (ca. 300 to 400 m from the Dufferin Lake Fault), has low Ni, Cu, Co, Zn, and Pb contents, and contains an unusually large amount (up to 5%) of secondary uranyl minerals. Additionally, a network of diabase dikes and sills is observed at Centennial, seemingly intruding the main U mineralization of massive uraninite, based on the relatively sharp contacts between the diabase dike and the high-grade U mineralization.

The pre-U alteration assemblage at Centennial includes kaolinite, illite, and sudoite, which have been formed by fluids with isotopic and chemical compositions that are comparable with those from other sandstone-hosted unconformity-type U deposits in the Athabasca Basin. Pre-U illite-related fluids have δ18O of ca. 3‰ and δD of ca. –40‰, whereas pre-U chlorite-related fluids have δ18O between 1.7 and 4.3‰ and δD between –18 and 1‰.

Laser ablation-inductively coupled plasma-mass spectrometry (LA-ICP-MS) U/Pb dating of the various U phases indicates that initial mineralization, represented by disseminated uraninite found directly to the north-northeast of the Centennial deposit, occurred at ca. 1.6 Ga. The main U mineralization, represented by massive and strongly altered uraninite, followed at an unknown time. A minor (<5%) unaltered uraninite formed from the local remobilization of the main massive uraninite at ca. 380 Ma. The main uranyl mineral, uranophane, formed last, at ca. 2 Ma. The recurrence of local U remobilization might have been facilitated by the persisting high permeability of the sandstones in the area due to the nearby Dufferin Lake Fault and to the emplacement of the diabase dikes.

The usefulness of Pb isotopes for exploration is demonstrated at the Centennial deposit, with strongly radiogenic Pb isotope signatures close to the deposit and a common Pb signature observed at a distance of a few km from the deposit.

Summary:
The Centennial deposit, situated on the south-central margin of the Athabasca Basin, presents several characteristics of a typical unconformity-related deposit as defined in the basin, including mineralogy, chemical composition of the main alteration minerals, and origin of the fluids related to these alterations. However, the ore mineralogy of the deposit represents a clear departure from what has been observed elsewhere in the basin, in particular in the amounts of uranous and uranyl phases present at Centennial, reflecting a complex and protracted fluid history. The presence of the diabase dikes, probably part of the McKenzie igneous event, which crosscut the mineralization, not only gives an indication for the age of the main mineralization, situated at between 1.27 and 1.59 Ga, but also underlines the particular conditions favorable for the preservation of U ore here: in spite of a high permeability and the evidence of multiple fluid events, there is very little ore destruction observed at Centennial. This apparent contradiction between high permeability and multiple fluid circulation events on one side and uraninite ore preservation on the other can only be resolved by the character of the fluids involved, which can only have been reducing but also poor in complexing agents such as P, C, F, and Cl. Finally, the usefulness of Pb isotopes as an exploration tool is clearly demonstrated at Centennial, with low 207Pb/206 Pb ratios, corresponding to radiogenic Pb, found in close proximity to the deposit.