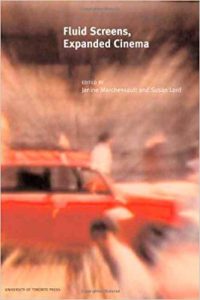 As a medium, film is constantly evolving both in form and in content. Fluid Screens, Expanded Cinema (with Janine Marchessault), considers the shift from traditional cinema to new frontiers of interactive, performative, and networked media.

Using the theories of Marshall McLuhan and Gilles Deleuze as a starting point, renowned scholars from the fields of film theory, communication studies, cultural studies, and new media theory explore the ways in which digital technology is transforming contemporary visual culture. The essays consider a series of questions: What constitutes the “new” in new media? How are digital aesthetics different from film aesthetics? What new forms of spectatorship and storytelling, political community, and commodity production are being enabled through the digital media?

Using Gene Youngblood’s 1970 book Expanded Cinema as an anchor for the volume, Fluid Screens, Expanded Cinema understands the digital not simply as a technological form, but also as an experience of space and time that is tied to capitalism. This important collection is unique in framing a range of social justice issues with aesthetic theories of new digital screen culture that will appeal to scholars and multimedia artists prepared to break new ground. (Learn More)