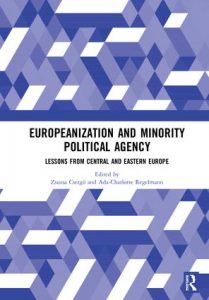 It is widely acknowledged that “Europeanization,” conceived as both the enlargement of the European Union (EU) and the diffusion of European norms and practices, has had a profound influence on the politics involving ethnic minorities across post-communist Europe. A significant body of literature has emerged about this impact, focusing on the emergence of European documents of minority protection after 1990; and the activities of European organizations and actors that pressured dominant state elites to adopt more minority-friendly policies in the framework of the institutional changes adopted during European accession. [. . . ] Yet most studies exploring minority political activism have focused either on domestic contexts or on “triangular” relations involving minorities, the states in which they live, and the “kin states” engaged in their political mobilization [. . . ] The question of how Europeanization has impacted the mobilization patterns and political agency of ethnic minority actors has received surprisingly little attention. The goal of this issue of Problems of Post-Communism is to direct attention squarely to that question. (Read More)