Europeanization and Minority Inclusion in Central and Eastern Europe 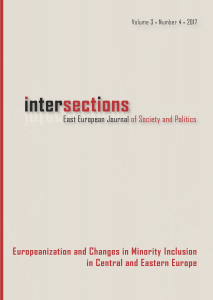 The question of how governments deal with ethnic diversity is fundamental to the future of peace and democracy in Europe. The way this question is articulated and addressed has changed significantly, as European governments and social actors respond to problems of regional security, domestic political contestation, and economic well-being.

After the collapse of the Soviet Union in 1991, the collaborative efforts of European organizations—primarily the Council of Europe (CoE), the Organization for Security and Cooperation in Europe (OSCE), and the European Union (EU)—provided a historic opportunity for the development of common European standards about minority inclusion across the whole spectrum of political and economic rights and opportunities available to state majorities. Europeanization, which involved the deepening of transnational institutional structures in member states, the enlargement of the EU to include an increasing number of countries from the former Soviet bloc, and the diffusion of European norms and practices in the EU and its neighbourhood, had a profound impact on the evolution of state-minority relations across the continent. Although Europeanization reaches all aspects of life in EU member and aspiring member states, the governance of ethnic diversity has evolved in diverse directions across the continent, rather than gradually converging toward common standards. (Read More)