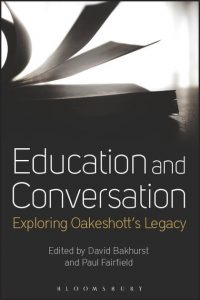 Since Michael Oakeshott spoke of education as initiation into ‘the conversation of mankind’ more than fifty years ago, the idea has inspired a diverse array of thinkers and continues to be invoked today by those seeking to resist the influence of managerialism and narrow instrumentalism in educational policy and practice.

In this book, co-editor Paul Fairfield and I, draw together papers written by scholars from both the analytic and continental philosophical traditions to offer a variety of perspectives on the implications of Oakeshott’s educational ideas. The metaphor of the conversation of mankind is explored, together with the roots of Oakeshott’s thinking in his early philosophical work, the relevance of his ideas to the concept of Bildung, and the significance of his political conservatism in evaluating the seemingly progressive potential of his educational ideas. In addition, concepts prominent in Oakeshott’s thought are taken up and brought to bear on contemporary philosophical discussions about education, learning and development, including the nature of initiation, the phenomenology of listening, and the value of the liberal arts tradition.