Deference and the difference Lydgate, Chaucer, and the Siege of Thebes 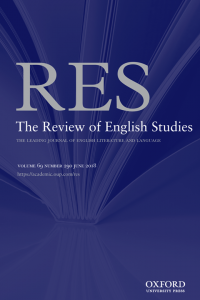 In the prologue to the Siege of Thebes John Lydgate adopts the pilgrimage frame of Chaucer’s Canterbury Tales and inserts himself as a character into his precursor’s fiction. Despite the richness of Lydgate’s intertextual reference, critics have read the Siege as an incompetent imitation of Chaucer’s Knight’s Tale that is hamstrung by lugubrious verse and conventional morality. This article argues that critics have overlooked two calculated acts of self-authorization that illuminate Lydgate’s attitude towards both Chaucer and his own art. First, Lydgate’s self-portrait in the prologue is a careful inversion of Chaucer’s Monk that redeems the authority of the monastic voice. Second, Lydgate imagines an alternative poet-patron relationship whereby his monastic identity authorizes him to resist the Host’s demand for a specific type of tale. Like the privileged counsellors within the Siege’s narrative, Lydgate’s poetic persona speaks the unwelcome truth to a figure representing secular authority. Lydgate’s deferential literary exercise is also a manifesto for the poet’s relationship to the political order, a relationship whose potential for aggressive and principled resistance rejects the submission to authority that is implicit in certain of Chaucer’s works. However, the prologue’s self-confidence is undermined by the rest of the poem: the futility of rhetoric and prudent counsel within the narrative threatens Lydgate’s entire historiographic project (Read More)