Debtfare States and the Poverty Industry: Money, Discipline and the Surplus Population 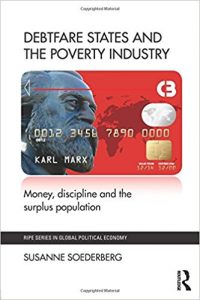 Under the rubric of ‘financial inclusion’, lending to the poor—in both the global North and global South—has become a highly lucrative and rapidly expanding industry since the 1990s. A key inquiry of this book is what is ‘the financial’ in which the poor are asked to join. Instead of embracing the mainstream position that financial inclusion is a natural, inevitable and mutually beneficial arrangement, Debtfare States and the Poverty Industry suggests that the structural violence inherent to neoliberalism and credit-led accumulation have created and normalized a reality in which the working poor can no longer afford to live without expensive credit.

The book further transcends economic treatments of credit and debt by revealing how the poverty industry is extricably linked to the social power of money, the paradoxes in credit-led accumulation, and ‘debtfarism’. The latter refers to rhetorical and regulatory forms of governance that mediate and facilitate the expansion of the poverty industry and the reliance of the poor on credit to augment/replace their wages. Through a historically grounded analysis, I examine various dimensions of the poverty industry ranging from the credit card, payday loan, and student loan industries in the United States to the micro-lending and low-income housing finance industries in Mexico.

Providing a much-needed theorization of the politics of debt, Debtfare States and the Poverty Industry has wider implications of the increasing dependence of the poor on consumer credit across the globe. This book will be of very strong interest to students and scholars of Global Political Economy, Finance, Development Studies, Geography, Law, History, and Sociology. (Read More)