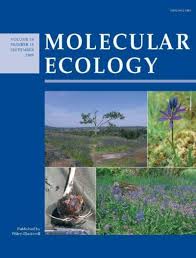 Biological invasions provide opportunities to study evolution over contemporary timescales in novel environments increasingly affected by global climate change, pollution and habitat fragmentation (Sax et al. 2007; Moran & Alexander 2014). Contemporary evolution in natural populations can occur both as an adaptive response to natural selection and through stochastic changes resulting from introduction history, founder effects and genetic drift. Evolution is considered to be adaptive when it increases survival or reproduction, which in turn affects population growth rates (λ). Identifying the causes and fitness consequences of adaptive evolution in natural populations is therefore informative for understanding long-term viability of populations experiencing novel environments.

Species colonizing new continents or spreading over large geographical areas are certain to experience environmental conditions that are novel in some way. Even if the climatic environment is similar to the native range, an introduced species still faces novel edaphic and biotic environments that may include different microbial, herbivore or predator communities, distinct competitive regimes, a lack of mutualists, or novel prey species. Adaptive evolution of traits that increase survival and reproduction in these novel environments will facilitate establishment and proliferation, increasing the number of potential colonists to new areas (García-Ramos & Rodríguez 2002). Thus, the rate and extent of adaptive evolution may be crucial factors affecting the establishment and spread of invading species. However, the majority of studies examining biological invasions have focused on testing ecological theory with little or no consideration of evolution.

The lack of evolutionary theory in invasion biology may owe to the strong influence of Elton’s (1958) volume ‘The Ecology of Invasions by Animals and Plants’, which briefly mentions polyploidy and pesticide resistance but otherwise does not consider evolutionary explanations for the establishment and spread of invasive species. The long absence of evolutionary theory from invasion biology may be surprising given that Darwin (1859) included several examples of ‘naturalizations’ to support his theory of evolution by natural selection in ‘The Origin of Species’ (Ludsin & Wolfe 2001). Evolution was also a major focus of Baker and Stebbins (1965) ‘The Genetics of Colonizing Species’, which was published just a few years after Elton’s book (Barrett 2015). However, contributors to this volume overlooked the possibility of rapid adaptive evolution during colonization, perhaps because the dominant view at the time mirrored Darwin’s (1859) original concept of a ‘slow and gradual accumulation of numerous slight, yet profitable, variations’. This view is clear in the introduction to Stebbins’ (1965) contribution, which despite explicitly examining genetic and adaptive characteristics of weeds associated with human activity concludes: ‘Consequently, weeds of one sort or another have probably existed since the middle of the Pleistocene epoch, and the major groups of weedy species may well have virtually completed their course of evolution by the time the first great civilizations reached their climax 2500–3000 years ago in the Old World and 1000–1500 years ago in the New World centers’.

In contrast to the long-held view of adaptations evolving over millenia, recent studies demonstrate that evolution can occur fast enough to influence ecological dynamics (reviewed in Hendry & Kinnison 1999; Reznick & Ghalambor 2001; Stockwell et al. 2003; Schoener 2011). Biologists have only recently begun to examine adaptive evolution during biological invasions, and the extent to which adaptive evolution influences ecological dynamics of natural populations in general remains poorly understood. Here we use a combination of meta-analyses, simulations and case studies to review evidence for rapid adaptive evolution in invasive species; we focus on its three key components: differentiation, natural selection and adaptation. In each case, we compare genotypes from the native vs. introduced range as well as among populations within the introduced range. Our approach illustrates both the value of using biological invasions to understand rapid evolutionary responses to novel environments and the potential influence of evolution on invasion dynamics. We conclude with suggestions for future research examining how evolution influences the establishment, spread and impacts of invading species, and potential differences in the response of invasive vs. native species to global change. (Read More)