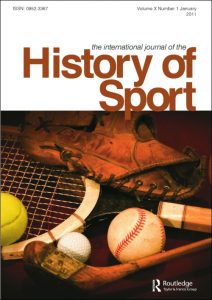 This paper published in The International Journal of the History of Sport (Vol 32, 2015, Issue 15: METHODOLOGY IN SPORTS HISTORY) identifies where sport history’s treatment of literature intersects with established literary critical perspectives and briefly highlights discipline-specific methodologies that can open up new lines of inquiry for historians interested in literature and sport.

Though there has been much scholarly debate about the value of literary texts as historical evidence, the field of sport history has long looked to literature for material that can establish or augment our understanding of the place of sport in the popular imagination in different historical periods. The use of literature in sport history scholarship often rests on understandings of literature’s relationship to broader culture that parallel those found in literary studies; however, there are still ways that literary critical methodologies can further enhance the sport history project. Identifying where sport history’s treatment of literature intersects with established literary critical perspectives will assist in highlighting discipline-specific methodologies that can open up new lines of inquiry for historians interested in literature and sport.

A key component of sport history’s understanding of literature as source material is its recognition of the literary text’s complex operations in culture. Though there has been a recent ‘literary turn’ in sports history, evidenced by the work of scholars such as Jeffrey Hill, Alexis Tadié, and Supriya Chaudhuri, this designation of literature as performing a complex social and cultural function has a much longer history. Early and influential works in the field adopt this perspective. (Read More)