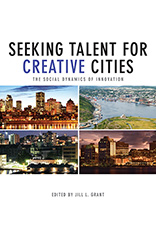 Cities and all their complexities fascinate me. My interest in cities are multidisciplinary, based in geography and drawing from planning, political science, economics and social psychology perspectives in both present and historical context. My academic approach to cities in echoed in the following passage from Gary Bridge and Sophie Watson in A Companion to the City (2000:1)

It is no longer possible, if ever was, to look at the city from one perspective – be it cultural or economic. Instead cities need to be understood from a variety of perspectives in the recognition that the cultural/social constructs, and is constructed by, the political/economic and vice versa. It is only when we adopt such a complex and textured reading of cities that we will begin to be able to address the pressing social, economic, and environmental questions faced by cities across the world.

I have chosen to focus primarily (although not exclusively) on North American cities as a way into exploring these complexities. I strive to be analytically diverse yet rooted in theories of urban political economy. This was the approach I used in my doctoral dissertation, which examined the economic challenges to and political responses of Toronto’s major governance restructuring in the late 1990s. Fast forward 15 years, and it is interesting to see how much those structural governance changes from the 1990s are impacting on the politics of Toronto today.

I am currently working on a proposal to study the impact of the 2008 global financial crisis on Canadian municipalities. There is a common perception in the academic and policy discourse that Canadian municipalities have fared quite well relative to localities in other countries since the global financial crisis of 2008 and subsequent state austerity responses. Yet little work has actually examined how the global recession and halting recovery is playing out both in inter and intra-urban contexts across the Country. Certainly we know the response has been varied; we also know that there are quite strong austerity discourses at play in different cities across the country.  To prepare for this new research direction, I recently edited a themed issue on Austerity in the City in the Cambridge Journal of Regions, Economy and Society (2014).