Body size and fitness in plants: Revisiting the selection consequences of competition 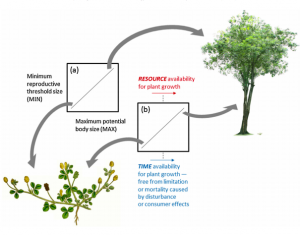 Having capacity for a relatively large plant body size is usually regarded as a key functional trait associated with success under competition between resident species within natural vegetation. This traditional ‘size-advantage’ hypothesis, however, generally fails to find support from several lines of recent research.

Possible interpretations are considered here, including one in particular that has been largely overlooked, which is, that a larger species generally also needs to grow to a larger threshold size before it can reproduce at all, and the latter may not be generally attainable when neighbourhood resources are severely contested. The implications of this are explored in calling for a revised model of the selection consequences of competition on body size in plants, where success is defined not just (or even most importantly) by capacity to capture resources and deny them to neighbours, but more fundamentally by the capacity to transmit genes to future generations, despite severe resource deprivation by neighbours. For this latter capacity, a growing body of evidence is pointing to an alternative hypothesis based on ‘reproductive economy advantage’. Under conditions of extreme and protracted neighbourhood crowding/competition (where virtually all resident plants are necessarily forced to remain, until death, at only a small fraction of their maximum potential body sizes), it is the relatively small species that are more likely to leave descendants here, simply because they need to reach only a relatively small body size in order to produce at least some offspring. Resident plants of most larger species, however, are more likely to die here producing none at all. (Read More)