Around and About Marius Barbeau: Modelling Twentieth-Century Culture

Related Book Chapter: Marius Barbeau and Early Ethnographic Cinema, in Around and About Marius Barbeau: Writings on the Politics of Twentieth-Century Canadian Culture 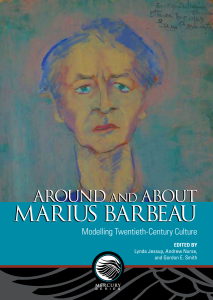 Marius Barbeau played a vital role in shaping Canadian culture in the twentieth century. This collection extends discussion about Barbeau beyond the life and work framework by providing critical and interpretative approaches to the different aspects of Barbeau. Rooted in the premise that his cultural work–in anthropology, fine arts, music, film, folklore studies, fiction, historiography–cannot be read uni-dimensionally, this book advances the idea that, by merging disciplinary perspectives about Barbeau, we can move toward deepening our evaluations and understandings of the situation around Barbeau.  The sixteen articles that comprise this book bear this idea out, suggesting that Barbeau’s cultural work needs to be considered from a variety of different perspectives, each of which carries with it complex and competing dynamics, as well as a critical and subject context.