Antimodernism and Artistic Experience: Policing the Boundaries of Modernity 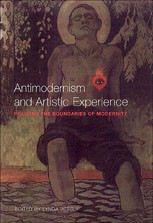 This volume critically addresses the ways in which ‘modern” artists used antimodern constructs in formulating work they saw as responding to, or expressing modernity. It examines the involvement of artists and intellectuals in the reproduction and diffusion of these concepts as ways of thinking about modernity in Europe and North America in the decades around the turn of the twentieth century, and they assess the impact on those people implicated in the construction of such social and cultural categories as Folk, Primitive, Authentic, and Traditional. In doing so, they also address the interrelation of fine art, decorative art, souvenir or tourist art, and craft, interrogating the ways in which these categories of artistic expression reformulate and naturalize social relations in the field of cultural production.

“Looking at Landscape in the Age of Environmentalism,” in Expanding Horizons: Painting and Photography of American and Canadian Landscape, 1860-1918, ed. Hilliard Goldfarb (Montreal: Montreal Museum of Fine Arts, 2009), 93-95, 85, 115.

“The Group of Seven and the Tourist Landscape in Western Canada, or the More Things Change…” in Interpreting Canada’s Past: A Post-Confederation Reader, ed. J.M. Bumstead, Len Kuffert and Michael Ducharme (Toronto: Oxford University Press, 2012); reprinted from Journal of Canadian Studies 37.1 (Spring 2002): 144-79.

“The Group of Seven and the Tourist Landscape in Western Canada, or The More Things Change…” in People, Places, and Times: Readings in Canadian Social History, vol. 2: Post-Confederation, ed., Cynthia R.