American Allies in Times of War: The Great Asymmetry 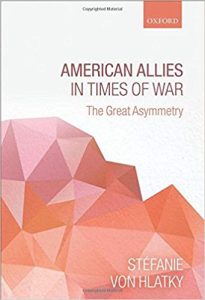 It shows how these allies can deploy strategies to overcome power asymmetries by resorting to leveraging, hedging and compensation tactics. While they can rarely influence their dominant alliance partner decisively, they are successful in resisting pressures exerted by the US. The argument builds on three central claims. First, power asymmetries between allies translate into different assessments of international threats. Second, when disagreements over threats arise, the outcome of intra-alliance bargaining is not necessarily dictated by the stronger power. Third, secondary states face a policy trade-off between establishing a reputation as a reliable alliance partner and pursuing politically-safer alternatives. The empirical focus of the book is on formal US allies, as they have the most to gain or lose by going along with American plans. The case studies are the United Kingdom, Canada and Australia’s response to the war in Afghanistan and the war in Iraq during the period from 2001 to 2003. (Read More)