A Political Theory of Territory 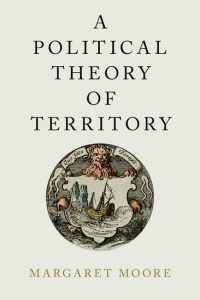 My central research interest is on questions of territorial justice, including boundary drawing, ethics of secession and contested territory.  Moore’s 2015 book defends a philosophical theory of territory, including what justifies it, who holds rights to territory, and what these rights are.

Our world is currently divided into territorial states that resist all attempts to change their borders. But what entitles a state, or the people it represents, to assume monopoly control over a particular piece of the Earth’s surface? Why are they allowed to prevent others from entering? What if two or more states, or two or more groups of people, claim the same piece of land? Political philosophy, which has had a great deal to say about the relationship between state and citizen, has largely ignored these questions about territory.

My book provides answers. It justifies the idea of territory itself in terms of the moral value of political self-determination; it also justifies, within limits, those elements that we normally associate with territorial rights: rights of jurisdiction, rights over resources, right to control borders and so on. The book offers normative guidance over a number of important issues facing us today, all of which involve territory and territorial rights, but which are currently dealt with by ad hoc reasoning: disputes over resources; disputes over boundaries, oceans, unoccupied islands, and the frozen Arctic; disputes rooted in historical injustices with regard to land; secessionist conflicts; and irredentist conflicts. In a world in which there is continued pressure on borders and control over resources, from prospective migrants and from the desperate poor, and no coherent theory of territory to think through these problems, this book offers an original, systematic, and sophisticated theory of why territory matters, who has rights over territory, and the scope and limits of these rights.

My book was the winner of the Canadian Philosophical Association’s 2017 Biennial Book Prize.