1 & 2 Thessalonians: An Introduction and Study Guide. Encountering the Christ Group at Thessalonike 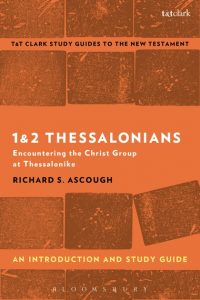 1 Thessalonians provides a fascinating glimpse into the origins and social life of the Christ group in the ancient Roman city of Thessalonike, while 2 Thessalonians reveals how the community developed at a somewhat later time. This guide narrates the story of the founding of the group by considering the social and cultural contexts, the literary form, the rhetorical strategies, the theologies, and the reception of the two canonical letters.

While centering on the texts of 1 and 2 Thessalonians themselves, the book draws widely on literary and archaeological data, giving particular attention to typical group behaviours among small, unofficial associations in the Greek and Roman period. The first four chapters focus on 1 Thessalonians, from the initial formation of the Christ group out of a small association of artisans through to how members negotiated various sorts of relationships: with Paul and his companions, with outsiders in Thessalonike and beyond, and especially with fellow believers within the group itself. The final two chapters turn attention to the shifting circumstances that required a second letter to be written, with its focus on disorder and disruption of social practices and theological beliefs. The epilogue briefly surveys Christianity at Thessalonike beyond the first century of the Common Era.  (Read More)

Department of Classics School of Religion